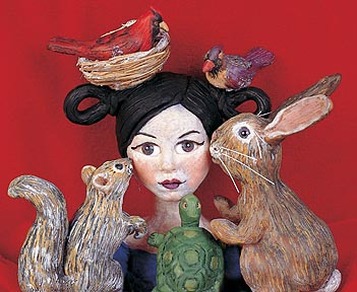 Cynthia von Buhler's award-winning illustrations have appeared in thousands of publications such as The New York Times, Newsweek, The New Yorker, Atlantic Monthly, and Rolling Stone. Her picture books include BUT WHO WILL BELL THE CATS?_ and THE CAT WHO WOULDN'T COME INSIDE (both Houghton/HMH), which was chosen as a Book Sense "Children's Pick" and "Best of 2006" by Parent & Child Magazine. In addition to her own titles, she illustrated THEY CALLED HER MOLLY PITCHER (Knopf) by Anne Rockwell, which was picked by The New York Public Library for their “100 Titles for Reading and Sharing” series, and LITTLE GIRL IN A RED DRESS WITH CAT AND DOG (Viking) by Nicholas B.A. Nicholson, which received a starred review in Publishers Weekly. Her cover art has appeared on books by Jane Yolen, Scott O’Dell and Elizabeth George Speare.  Neil Gaiman commissioned her to create his “EVENING WITH NEIL GAIMAN AND AMANDA PALMER” poster and album art.
​
​“I was seduced by Cynthia von Buhler's artwork: her styles are protean but always appropriate, her eye is observant, her hand is keen. She's a wonder.” – Neil Gaiman